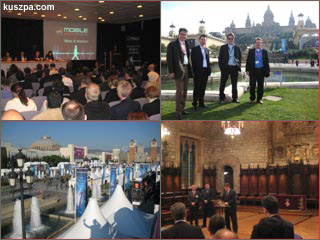 Today I went to a Mobile Society Session with the title ‚High Society – The Rise of Social Networking‘ moderated by Bena Roberts from BKI Media. After the Presentations of Jane Wilding (Product Manager, Social Networking, 3UK), ‚Exclusively Mobile – How Mobile Can Change the Social Networking Phenomena‘ and Jordy Mont-Renaud (Lead Mobile Developer, Bebo), ‚What Will Be the Killer Mobile Social Networking Application‘ we had an Panel quite interesting discussion about Approaches to Mobile Social Networking with the two lecturers and Jed Stremel (Director of Mobile, Facebook), Bobby Srinvisan (CEO, Roamware), Dominick Tolli (VP, Mobile Data Division, Virgin Mobile) and Sean Kane (General Manager, International, Intercasting Corporation). I’m very excited about what the close future holds in store for our industry…

In the evening we went to a reception in the Saló de Cent in the town hall of Barcelona by invitation of Fritz Schramma (mayor of Cologne) and Jordi Hereu (mayor of Barcelona). The finger food and the drinks were ok, but the party was missing :o)