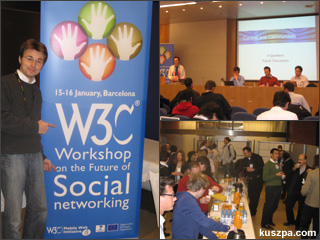 Me, panel discussion and networking lunch.

The second day at the W3C Workshop on the Future of Social Networking started with three lectures; ‚Adding Context to Location and Adapting the user experience according to context‘ by Julian Pye (Vodafone Group R&D Germany), ‚Sentient Computing meets Social Networking‘ by Simon Hay (University of Cambridge) and ‚Capturing, Using, and Storing Users‘ Locations‘ by Dan Melinger (Socialight). Unfortunately the presentation by Bastian Pfister and Roman Hänsler (aka-aki networks Gmb) with the title ‚A Vision of an open Platform – The Enablers Perspective‘ was canceled, because the guys from aka-aki were missing.

Afterwards there was also a panel discussion with Simon Hay, Julian Pye and Dan Melinger about what control should the user have and what are the privacy/security measures which should be in place. And at the end there were also some shorter presentations e.g. Henry Story from Sun Microsystems and some talks about next steps and the conclusions of this initial event by W3C.

All in all this W3C Workshop was interesting and above all very inspiring for my work, but I was a little bit surprised that nobody spoke about the effects of the worldwide financial crisis on our business segment of (mobile) social networks. And now I have to check the W3C Mobile Web Initiative and the W3C Social Web XG Chapter in more detail.