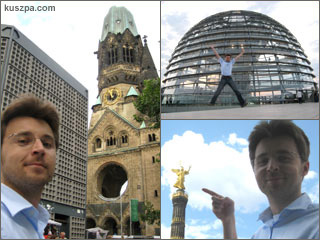 Kaiser Wilhelm Memorial Church, jump on the roof of the Reichstag and the ‚little‘ Berlin Victory Column.

Because of a business meeting with Jamba, I was once again in Berlin and also had the possibility to a enjoy a teeny city trip. Having beautiful weather and running around from ‘Unter den Linden’, through ‘Tiergarten’ to ‘Kurfürstendamm’, I saw among other things the ‘Fernsehturm’, ‘Humboldt Universität’, ‚Brandenburgertor‚, ‘Reichtag’, ‘Potsdamer Platz’, ‘Sony Center’, ‘Checkpoint Charlie’, ‘Siegessäule’, ‘KaDeWe’, ‘Kaiser-Wilhelm-Gedächtnis-Kirche’. The evening view on the roof the Reichtag and the hot chocolate in ‘Reinhards’ at the Kempinski Hotel Bristol were just great :o)

It so happened that the Berlin House of Representatives – across from the Federal Ministry of Finance – had a open day. So I had a quick look at the office of Walter Momper (the President of the Berlin House of Representatives), at the gallery of honorary citizens of Berlin and inside the plenary hall. Outside they had a big party with live music by police orchestra and varied catering.