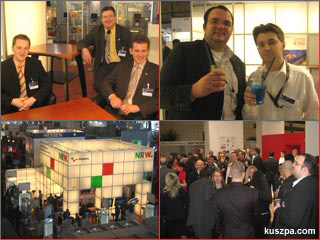 CeBIT is a good place not only to have some business meetings, but also to meet old friend e.g. from my old years of study; Carsten from TrendScouts Media Ltd. stopped by for a chat. But also Marcus (Peperoni team mate) popped up on the booth.

But let me also introduce the other two projects from the University in Hagen and my colleagues… firstly we have the crew of the University of Hagen`s Certification Authority (CA) with Henning (Boss), Stephan (Team leader), Daniel and Ralph (Dudes). And then we have Andreas from the Department of Electrical Engineering, Control Systems Engineering group (PRT) with his project Pediaphon – Let your computer read out the Wikipedia for you!

In the evening we move on at first to the networking event of our German federal state North Rhine Westphalia. On our hunt we found tasty (and warm!) food and the colleague could satisfy their thirst with lots of German beer – but thanks to Marcus we also got some delicious cocktails :o) Later on we moved to next networking party on the joint stand of the German federal state Hesse and than to the Bavaria booth. And again we got food, drinks, music and entertainment in abundance…